Flight Sergeant Alexis Boehler, an Air Cadet with Royal Canadian Air Cadets 779 Squadron, located in Mt.Hope, Ontario was out for dinner with her family when she noticed a man next to them was choking on his food and turning blue.

“I walked towards their table and introduced myself as a first aider, asking him if he needed help. In one movement of the Heimlich manoeuvre, the piece of meat was dislodged, and he was able to breathe again,” said Boehler.

Not only are we incredibly proud of her for saving this mans life, we are also proud that she is the Youth Ambassador of The Canadian Heroes Foundation.

“Alexa reached out to us in 2014  as she  has followed CH  and every year in school on remembrance day she would play  the Canadian Heroes song during the  assembly.   Her parents wanted to get her a hoodie  for Christmas  so I delivered it in person. And  we asked her if she would like to be our youth ambassador  to help  promote   supporting the  families  and sharing the importance of remembering  to the youth.  She has attended  a couple  highway rides with Anna Loveman a Silver Cross Mother and board member and helped raise $ 3000.00 after one of the events selling merchandise.  And  all awhile she was  waiting to join the air cadets . She also attended the  park dedication for one of our fallen heroes that we organized. She is a remarkable  young lady…” says board chair Brent Schriner.

Alexis says “Since becoming the Youth Ambassador, I’ve learned from WO Brent Schriner and Anna Loveman the courage it takes to help lead and advance within Canadian Heroes and Cadets. Being with Canadian Heroes has given me an opportunity to work with an amazing team and has helped me follow the right path to always helping others. Since WO Schriner is an inspiration to me, it has lead me to want to follow in his footsteps in the medical field within the Armed Forces.”

We are very proud of this young lady and we wish her all the best as we follow her towards her goals.

There are two newspaper articles we will also attach to this story.

Flight Sergeant Alexis Boehler is an outstanding member of 779 “Black Knight: Air Cadet Squadron. A hard working, dedicated NCO with a genuine passion for helping others Alexis enjoys her leadership role in working with cadets.  Although anxious for a return to in-person training she is actively engaged in the Squadron virtual training program where she uses her knowledge and experience to mentor more junior cadets.

Flight Sergeant Boehler is a tribute to her Squadron, her community, and the Air Cadet Movement. She is an exceptional individual who will excel in whatever future career field she ultimately follows.

Flight Sergeant Alexis Boehler’s receipt of the CJCR Commander’s Commendation for her actions in January of 2020 is well-deserved.  She credits her First Aid Training which she received while on course at a Cadet Training Center with giving her the knowledge and confidence to help someone in distress.

Her calm and decisive action when presented with a potentially life-threatening scenario are a testament to her character, which I have observed over the last four years to be that of an exemplary cadet and citizen.

The example Flight Sergeant Boehler has set is a tribute to her personal strengths and leadership abilities, and also exemplifies how what is learned within the Canadian Cadet Organization can have positive impacts throughout the community. 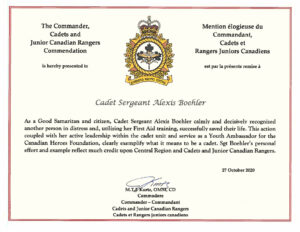