Operation Lost Medals purpose is to find family members of our fallen heroes and re-unite them with their medals. This is a global initiative and we bring family members together with the medals that are found for sale online, flea markets, etc…

We have about a dozen volunteers that use online databases like Ancestry, etc… to build family trees to track down family members.

Medals are either donated to us or sold at a reduced cost.

The medals are cleaned, mounted, new ribbons, and any paperwork we can find on the soldier is given to the family as well. 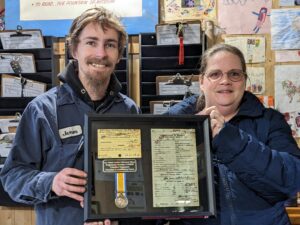 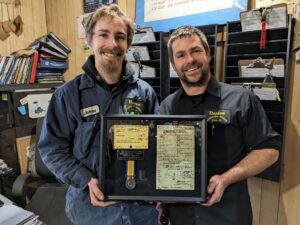 What a day in my hometown of Hamilton today!

On May 10, 1918, Robert enlisted with the CEF. Shortly after enlisting he set sail and arrived in England on August 15, 1918. During his time overseas he served with the P.B. Company of Canadian Engineers and was dispatched to France. As the war was wrapping up during his time there, we see that Robert left Le Havre, France on May 16, 1919, proceeded to England and on June 30, 1919, in Montreal, Quebec, Robert was discharged from service.
It wasn’t long after Mr. Wilson returned to Canada that he married Annie Isabell Brown on November 15, 1919. Unfortunately, Annie passed away in 1927. Robert then married Beatrice Ellen Louise Kiehl on August 31, 1932.

Upon returning to Canada, Robert opened his own business, Barton Radiator Works, in 1924. Amazingly, Barton Radiator Works is still in operation. Robert G.S. Wilson passed the business down to his son Robert W. Wilson, who passed it on to his son William (Bill) Wilson. Today you will find the fourth generation of Wilson’s, David and James, continuing to keep their great, great grandfather’s legacy alive. An amazing story, I am so proud of all the volunteers that were involved in this case!.