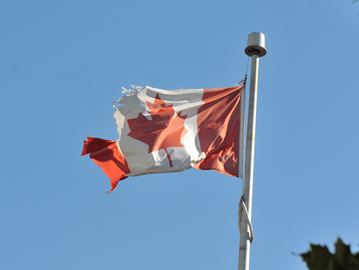 What do you do with a tattered, torn, Canadian Flag?

People have asked us this question a lot, and I myself for years wondered the same thing.

You may remember years ago we starting researching this and even starting asking our politicians the very same question.

I was usually answered back with a blank stare.

Surely we must have a way to retire our flag I was thinking.

But alas, our Countries most cherished symbol never had an official way to be retired.

Until now that is.

Note that I have not used the word ” destroy” or other words that have and been used by government and military, we instead will use the word ” retire”, it is more fitting of a word and description to be used.

It has been years since our proposal was given to the Minister of Canadian Heritages Office, and we did get a call back thanking us for our great work across the Country.

When I took the call, I asked the same question, ” What do you do with a tattered and torn Canadian Flag.?”

Again, the usual pause…..took place and the staffer responded that they did not know, and suggested to destroy it in a dignified manner?

In the next 30 minutes I laid out everything what we where proposing, from the gathering of flags and sending via Canada Post ( postage free) or taking them to there local MP’s office and having them sent to us.

We were again thanked for all the great work that we do, the staffer was very impressed and liked what was being proposed. This was years ago and we are still waiting to hear back, but since we have not heard we will proceed by ourselves to roll the program out across Canada.

So this set in motion a chain of events that came together rather quickly.

I thought a poem would be fitting that could be read during the ceremony, so many years ago I called Roger Borchert in Slave Lake Alberta, Roger has written poems for each soldier that we lost in Afghanistan, and is a true Patriot.

It was funny actually, when I called Roger and told him what I wanted he said he was to busy and had a lot on his plate and I would have to wait awhile.

Less than 24 hours later I had the first draft of the poem.

Roger has also written some great words that we have used on fallen heroes memorials that we have built, a true gift to Canada and all Canadians this man is.

Our leaf unfurled high above
As nature took its toll
And not unlike the season’s change
Our leaf has reached its goal
This little patch of fabric
Onto which our hearts have clung
Has been our focus flying high
Each time our anthem’s sung
It has led us into battle
Enwrapped our fallen ones
Flown lower at times at bow
To recognize an honoured one
It has flown with joy or flown to say
Canada here we stand
To let all know just who we are
As it blows freely across our lands
Though never tired but worn with time
A new one must replace
Our flag who’s seen its duty’s day
Must be retired in honour’s way
We send you off our hearts embrace
That which holds the glow
Of early morns, setting suns
In skies that crest our lands
From oceans deep to mountains high
You held our vision’s eye
As ashes to ashes and dust to dust we return you to our land
Now in nature’s way and our anthem sang
We see a brand new leaf today
Flying high above our heads
Unfurled once more again
Canada rides the sky above
Glowing in the wind

Some people say bury it, some say burn it, but millions of Canadians live in buildings and obviously they cant do that.

As a Military person I was fortunate to be schooled in proper deportment, discipline, ceremonial practices, etc by many great people in my past, the ceremonial overtones are extremely important.

For you as a Canadian, you can do your part and help us by collecting and sending to us any and all Canadian Flags that need to be retired. We will ask again for our MP’s to help out as well, and see if Canada Post can exempt them from postage, as it can be expensive for the larger flags weighing 100lbs.

Over the years we have literally had thousands of Canadians message us and post on our face book page pictures of torn flags at schools, banks, you name it, and we have reached out to many of them and asked them to replace them and they have all responded favourably like we would expect.

Many have taken it into their own hands and asked the person, company or Government institution to replace it and we have always heard back that a new flag is now flying high and proud!

We are planning our first Canadian Flag Retirement Ceremony shortly, the ashes left over will be collected up and sprinkled over our Veterans Graves.

Please get the word out, share this link and send us your flags to us at